When it comes to the ground game, one wrong move and it could all be over in the 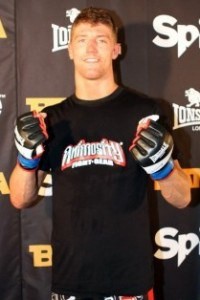 blink of an eye. In today’s episode of Across The Pond, you will meet a fighter who is a magician when it comes to the ground game. A professional since October 2014 and fighting out of Team Kaobon Midlands, Harry Marple is undefeated so far in his career with a 3-0 record consisting of two submissions and one knockout. Marple is still relatively green in his career and has a bright future ahead of him in the sport. If there is one thing we know about Team Kaobon fighters, they are relentless when it comes to the ground game both on top and off of their backs so watch out.Marple won his MMA debut at FCC 11 via Rear Naked Choke in the first round. He then signed with BAMMA. In his debut fight for the promotion, Marple took on Chris Astley at BAMMA 20 and defeated him via submission in the second round. He next faced France’s Sergiu Berdilla at BAMMA 21 and defeated him via defeated him via knockout early in the first round. Marple will now face Shane Gunfeild at BAMMA 23 on November 14th, 2015 who replaces the injured Tim Menzies.