As a fighter, there is no greater feeling than fighting in your hometown in front of your friends and family and hearing the roar of the crowd cheering you on. In today’s episode of 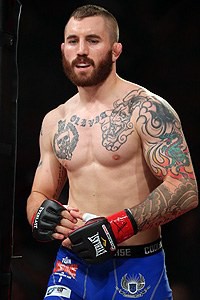 Across The Pond, you will meet a fighter who always makes his fans proud no matter where he goes. A professional since September 2007 and fighting out of SBG Manchester, 32 year old Martin Stapleton owns a 16-4 record in 20 career fights consisting of six knockouts, five submissions, and five decisions. Martin won his first four fights that included knockout wins of Chris Thomson and Steve Warris and a unanimous decision win over David Johnson. Martin has fought for various promotions in Europe and The United States including Full Contact Contender and Bellator. In 2009, Martin was a contestant on season nine of The Ultimate Fighter US V UK as part of ”The Count’s” team. Soon after his TUF stint, Martin won his next two fights which included a knockout win of BAMMA veteran Andrew Fisher. Following a three year hiatus from the sport due to a military commitment, Stapleton defeated Cage Warriors veterans Jason Cooledge, Jamie Rogers, and Tommy Maguire before signing with Bellator in 2013 as part of their Lightweight tournament. Following his release from Bellator, Martin scored a second round knockout at FCC 11 before signing with BAMMA in 2014. In his debut fight for BAMMA, he faced France’s Sebastian Fournier at BAMMA 17 via submission in the first round. Stapleton next faced Jeremy Petley in the main event of BAMMA 19 and defeated him via knockout early in the third round. He will now face Gavin Sterritt for the Lightweight title at BAMMA 23 on November 14th, 2015.