We all know that when it comes to Heavyweights, they possess pure power in their hands. In today’s episode of Across The Pond, you will meet a Heavyweight who not only 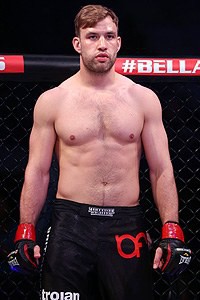 possess great powerful strikes, but also the attention and skill needed to lock in airtight submissions. A professional since August 2010 and fighting out of Team Titan with UFC veteran Brad Pickett, 27 year old Stuart Austin owns a 9-2 record in 11 career fights consisting of 4 knockouts, 4 submissions, and one decision. In his MMA debut, Austin defeated Kurt Crowhurst via knockout in the first round. He has fought for various promotions in Europe and the United States including BAMMA and Bellator. Under the tutelage of European MMA  legend Brad Pickett, Austin is becoming a well rounded fighter with a wide variety of techniques. After a two fight stint with Bellator in 2014, which included a first round submission win over Craig Hudson ,he signed with BAMMA in 2015. Austin earned his first win for BAMMA in June of this year when he defeated Tom Aspinall via heel hook in the second round. He will now face the heavy handed Paul Taylor at BAMMA 23 on November 14, 2015. Best of luck Stuart!