by Peter Knox
in MMA News
35

Paige VanZant (6-1) has a new opponent for Dec 10th and it’s none other than 3rd UFC Ranked Strawweight Rose Namajunas (3-2), the match up was officially announced by UFC President Dana White today. 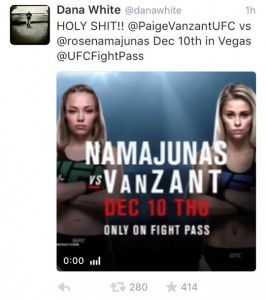 The reason for Joanne Calderwood’s removal from the card has not yet been revealed, the news was first announced by Paige VanZant’s teammate Justin Buchholz on Team Alpha Male’s radio show ‘Stud Show’.

With a 3 fight win streak in the UFC 21 year old VanZant is quickly gaining popularity most recently defeating Alex Chamber via third-round submission.

Namajunas, who was runner up on The Ultimate Fighter 20 is coming off a submission win earlier this month against fellow TUF member Angela Hill at UFC 192