Ed Arthur: “I want it more than all of them!”

by Peter Knox
in MMA News
29

MMA UK Correspondent Jade Morris caught up with the Bantamweight Champion Ed Arthur as he prepares to face Shay Walsh at BAMMA 23: Night of Champions on November 14th at The Barclaycard Arena. 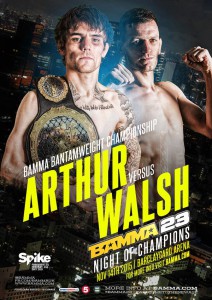 Ed Arthur has had no shortage of opponents and is looking to continue his undefeated record by taking out another top prospect.

This is your first title defence since claiming the vacant Bantamweight Title at BAMMA 20 defeating Ireland’s Alan Philpott, are you excited to defend your belt? The belts great but I’m more excited about taking out other top prospects like Shay and to do it shown live on spike TV makes it even better! I want big names on my record the belt is just a bonus!!

You were disappointed with your last performance, what can we expect to see from you in this fight against Shay Walsh? My foot work was terrible in the last fight, all my training up until the fight with Alan I was moving smooth but putting great pressure on, I was so confident against Alan I wasn’t moving smooth I was forcing things so against shay your going to see pressure from the bell but much more smooth, with ninja head movement and footwork

Having fought in the weight class above Shay Walsh is one of the bigger Bantamweights, does that add pressure at all for this fight and do you think he is the most dangerous opponent for you? It just another guy to me. Shay has a lot of hype behind him but I don’t see anything that jumps out and tell me it’s a problem, he’s a good fighter but not good enough to beat me!! If a man can make the 135lb limit then we are the same size so I’m not thinking of that

Not long ago you were training in Thailand, will you be going back there for your fight camp or are you staying in the UK? Thailand is not the right place for MMA training so I will be going there for fun but not fight camps

I noticed on Twitter you have been getting in to Yoga and working on Strength and Conditioning a lot more for this fight, how is it going? I’m a completely different fighter after working with Jack at JEM performance and well being. It has changed everything! I had a teenagers body before but this fight I’ll be stepping in with a real athletes body

So… there was a lot of attention on your hair in your last fight, can we expect to see it in a top knot soon?? Haha funny you say that I’m off to get it cut today and the ninja top knot will be coming out, not a small one but a Samarai style one

So tell us something the fans don’t know about you, what do you like to do outside of fighting? Or tell us what your guilty cheat meal is? That’s a hard question for me to answer because all I do is train and think MMA but something people don’t no … I used to have a fear of peanut butter, it was really bad I couldn’t even be in the same room as it but I’m over it now… Maybe lol

I’ve noticed you haven’t got a fighter nickname yet? We should ask the BAMMA fans to think of one for you what do you think? I don’t really do nick names it’s abit WWE for me Ed “I’m a double hard geezer” Arthur

With an undefeated record of 6-0 and a relentless ground and pound game you have been labeled as one to watch as has Featherweight Champ Tom Duquesnoy who announced that he is making the drop to Bantamweight, as the Bantamweight Champ what are your thoughts on that fight? Anyone, anytime any place!! I’m game for any big fights. Just put me in there with them I’ll always find away to win I want it more than all of them

You were disappointed not to be on the BAMMA 22 card as you like to remain active, with BAMMA announcing they are heading back to Ireland at the start of next year in February would you be keen to get on that card? I want 4/5 fights a year, I want to keep learning in the cage and make money. I’m not in this game to win a few fights I want to keep winning as make enough money to change my family’s lives, I’m not going to do that fighting twice a year so next year I want February card and plenty more after