by Myles Painter
in Across The Pond
41

For 21 seasons, The Ultimate Fighter has been home to some of the up and coming E 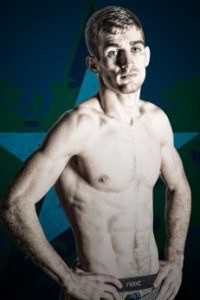 uropean prospects like Davey Grant and Arron Wilkinson. In today’s episode of Across The Pond, you will meet a fighter who was on season 18 of the show and made it all thew way to the semi finals.   A professional since November 2009 and fighting out of Liverpool MMA Academy, Mike Wooten owns a 9-0 record consisting of four knockouts, three submissions and two decisions. In his MMA debut, Wooten defeated Daniel Howard via knockout in the second round. He also defeated his next two opponents by knockout before earning a Unanimous decision victory over Mark Connor. Wooten secured three more victories including a third round submission win over Cage Warriors veteran Alan Philipott.  In 2014, he signed with BAMMA and he has been  making big waves ever since. At BAMMA 16, he faced Antonie Gallinaro of France and defeated him via submission late in the second round and at BAMMA 17 he defeated Peter Ligier via Unanimous decision.  Watch out for this up and coming Bantamweight to put other 135 pound fighters on notice.