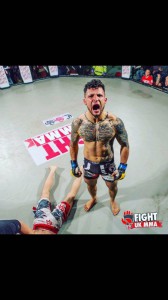 Every fighter has their go to submission. In today’s episode of Across The Pond, you will meet a fighter who is very adept with his go to submission. A professional since October 2011 and fighting out of Trojan Free Fighters with head coach Paul Sutherland, 25 year old Mario Saeed owns a 8-2 in 10 career fights consisting of six submissions with four  of them coming via way of Armbar. Mario is well known for his trademark move and will take your arm if you are not careful. He has fought for various promotions in Europe including a two fight stint with Cage Warriors in 2014. In his MMA debut, he defeated Mark Baxter via submission in the first round. Mario defeated his next three opponents including Sean May and Leon Rosser via submission before picking up his only decision to date over Wayne Drake. In 2015, Mario defeated Tomaz Kolzlowski via rear naked choke in the second round.he will now face Myles Price on February 27. as part of BAMMA’S return to Dublin at BAMMA 24. Best of luck Mario!