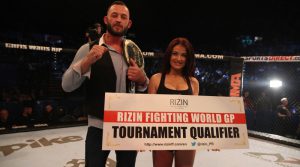 BAMMA Heavyweight Champion Mark Godbeer who was scheduled to fight on the Rizin FF Tournament in Japan on New Year has officially announced his retirement from MMA following his latest injury forcing him to pull out of the tournament.

“I’ve had a few days to think and settle down. over the coarse of my fight career I have suffered many injuries. I’ve had on going issues that has lead me to this point. after serious consideration I will no longer be fighting at a competitive level… I’m retiring from MMA. I’ve said this before but this time its for real. I have been blessed to compete at world class levels and traveled the world doing so. The truth of the matter is this it has come at a massive financial cost, even had the bailiffs take my car last week at what cost! I have laid out thousands in training fees lessons private tuition and fought some of the best in the world at a loss, don’t tell me I haven’t dedicated myself to this sport, I’m no longer doing it for every other cunt to get rich from me. Not anymore.. iv been ripped off by management companies lied to and can no longer deal with the falseness the MMA world is surrounded by. us as fighters get fuck all for what we put our body through. Then 15% management fees then after all this not a single fucking penny help towards training, physio or well being. After all this I’m basically fighting for fuck all. no more I’m done find another mug to fill my place.. kids as a role model if your looking at taking up MMA as a career to feed your family think again… I’m 100% done…”

Godbeer (10-2) won the Heavyweight title after defeating Paul Taylor at BAMMA 21 in June, Godbeer was then scheduled to face Ruben Wolf at BAMMA 23 but pulled out later announcing he would be taking part in the Rizin tournament. Stuart ‘He-Man’ Austin who is one of Godbeer’s training partners stepped in to face Thomas Denham winning via TKO to take the Interim Heavyweight Title.