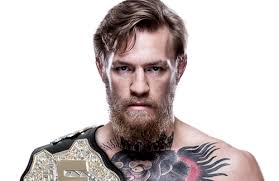 Who is the real Conor McGregor? Is it all an act? We spoke to people who know McGregor best.

Dustin Poirier was seen as the opponent who could stop McGregor’s hype. He lasted less than two minutes.

Poirier said: “Conor is definitely the real deal. I’ve had 22 fights and I’ve never been put out like that. I was very emotional, just because of everything that had gone on between me and Conor. The build-up to the fight between us made me fight emotionally, rather than relaxed, which is how I like to fight.

“He hit me with a good shot and I went down. I’d love to do it again. I wouldn’t get hit with that shot again, and I wouldn’t let myself get so emotional.”

Dave Hill lost to McGregor three years ago on the regional circuit. He remembers a cocky Irish kid with remarkable self-assurance.

Hill said: “I thought it was all an act, all for show. He was kicking off at the weigh-ins. But when he got in my face, because of his intensity, I thought ‘he really believes in himself’. That flustered me.

“He’s overwhelming in a fight because he’s always in your face, he’s so confident. He was talking to me during the fight, saying I look soft, and it made my mind go elsewhere. I was thinking ‘should I say something?’ He has a presence that doesn’t give you a rest and puts you on the back-foot.

“I don’t think it’s an act anymore. But when I started fighting him I realised that he believes everything he says – that’s the way he is.”

I knew Conor would be a great fighter but i didn’t know he would become so popular. He was always a charismatic guy but i couldn’t have predicted how big he would get. He never has moments where that gets on top of him. Pressure is for tyres.

Aisling Daly, a UFC women’s straw-weight contender, has risen through the ranks alongside McGregor at Dublin’s SBG gym.

Daly said: “He’s still the same guy that I knew when we were teenagers but he has fancier shoes and nicer cars. Everything else about him is the same. He makes everyone realise that, with hard work, they can have the mansions and the fancy cars too.

“We don’t believe in natural talent, you can have better genetics but you still need to work hard at it. For me, Conor is obsessive which works fantastically well for this sport. He will become obsessed with one aspect of fighting until he gets good enough where he can obsess about something else.

“Because we’re a family there’s no begrudging him, we’re all sending positive vibes to him. When one of us makes it, we all make it. We’re all in the gutter looking up at the stars. Sometimes Conor will turn up for training in a five-piece suit but, on a normal day, he’s rolled out of bed and arrived in a beanie hat and a track suit. He’s like the rest of us.”

Boylan said: “Without doubt he’s our biggest export, nobody can deny his prestige. I remember the phone call when I offered him a title shot and he said ‘I’ll fight tomorrow’.

“When we had Conor for his fifth and sixth fights, we knew he’d go on to special things. He just acted differently to everybody. He stood out from a crowd of 30-odd fighters, everybody was looking at him. People with long teeth behind the scenes realised that if he could back up the things he was saying then he’d be a star. Conor won all his fights in Cage Warriors because he got into his opponents’ heads.”

Edgar said: “Maybe he is the second coming like he’s been telling everyone! I don’t get caught up in the attention around McGregor. Is he skilful? Yes. Does he bring attention to the rest of us? Yes. But he’s not always respectful.”

We know that Conor has lost twice by submission. He was willing to give up twice. He tapped out to a choke and a knee hold, which is a move where you give up before it becomes a problem because youre anticipating pain. I have seen that he is capable of giving up.

Professor Greg Whyte puts McGregor through a series of tests to compare him against other sportsmen.

Whyte said: “His VO2 max is similar to a Premier League midfielder. They run 10-12km a game with short breaks whereas Conor competes for up to 25 minutes. That is all-out effort and his endurance capacity is right up there with the best midfielders. It is his ability to recover before returning to his peak which is impressive and those values are similar to those of footballers.

“His power output on a bike is not like an Olympic cyclist but what separates Conor is that he can do it all. He outperforms a cyclist in other areas.”