UFC Fight Night 80 Results: Namajunas with a dominant performance over a resilient VanZant 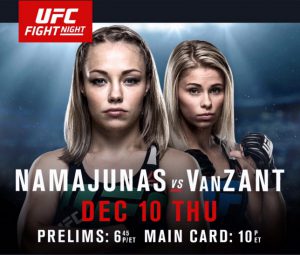 UFC Fight Night 80 which kicked off the start of fight week certainly didn’t disappoint with Thug Rose Namajunas (4-2) putting on a dominant performance against 12 Gauge Paige Vanzant (6-2) in a Strawweight bout in Las Vegas.

VanZant who was the betting favourite coming in to the fight was quickly exposed by the more experienced Namajunas who dominated all 5 rounds. Namajunas who was a cast member on The Ultimate Fighter 20 caught Paige in a few nasty arm bars but through true grit and determination a bloodied VanZant proved she is one tough fighter as she battled her way out of them. Namajunas eventually caught Vanzant in a rear-naked choke in Round 5 to get the win.

When asked about the fight Namajunas commented:

‘I thought there would be arm bars all day, but I saw pictures, I knew her arms were kind of grumm, so I knew not to get frustrated if I didn’t get the tap out right away’

During the post-fight press conference a very emotional and tearful Paige VanZant admitted she wasn’t ready for the fight but she will come back from it and gain more experience.

‘I got outclassed in every way so I’m just going to get back with my team, my game plan and my technique, I’m sad but I’m fine’