by Peter Knox
in UFC
6 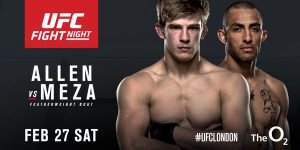 UFC Featherweight Arnold ‘Almighty’ Allen is the latest British fighter to be added to the UFC Fight Night London card which is set to take place at the o2 Arena on February 27th, 2016.

Allen (10-1) who put on an impressive performance defeating Alan Omer in round 3 with a guillotine choke in his UFC debut at UFC Fight Night 69, Berlin is set to face Yaotzin Meza.

Meza (21-10) has had 6 fights in the UFC and is coming off a decision loss to Sam Sicilia.