When fighting a opponent, you want to dictate where the fight goes. In today’s episode of Across The Pond, you will meet a fighter whose slick ground game is a tough puzzle for most opp 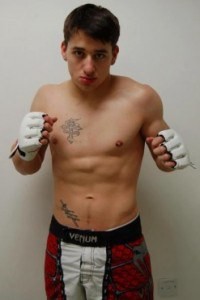 onents to solve. A professional since July 2010 and fighting out of Kyouken MMA, Mike Cutting owns a 7-3 record in ten career fights with all seven of his wins coming via way of submission. In his MMA debut, he submitted Mike Taylor in the first round before earning back to back submissions over Paddy Moore and Danny Welsh respectively. Then, Cutting submitted Jason Jenkins via inverted heel hook in the first round. On short notice in 2013,replacing the injured Alex Brunnen, he defeated Shane Mansfield  via armbar to capture the International Fightclub Championship Belt.  At BAMMA Fight Night 2 in 2014, he submitted Richie Edwards via armbar in the second round. He continued his winning ways in 2015, submitting Nathaniel Wood in the first round via armbar at BAMMA 18. Cutting will look to notch his eighth submission when he takes on unbeaten Declan Dalton at BAMMA 24 on February 27. Good luck Mike!