Ronda Rousey Not To Fight At UFC 200, Wants More Time Off 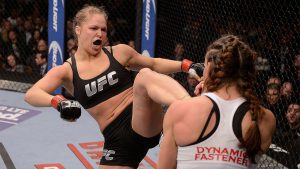 Reports have come in that former women’s bantamweight champion Ronda Rousey will not be as active in 2016 as she was last year, in 2015.

UFC President, Dana White, spoke to Yahoo Sports and confirmed that he and ‘Rowdy’ Ronda Rousey had agreed that she would not be fighting as planned at UFC 200 in July. Ronda is due to star in the remake of ‘Roadhouse’. The filming for the movie had been pushed back, White said.

Due to this pushback in filming, Rousey asked Dana White for more time off before returning to the Octagon since her loss to Holly Holm back in November 2015.

Dana White confirmed that this was the reason that he allowed Holm to defend her title against Miesha Tate at UFC 197 in March as opposed to waiting for the return of Ronda Rousey. Holm and manager Lenny Fresquez had been pushing for an interim fight from the time it became apparent White was targeting the rematch for UFC 200.

The only risk is if Tate beats Holm, because then the Rousey-Holm rematch will be worth far less. But White said it was a risk he was willing to take.

No fighter, White said, has done more for the UFC than Rousey and so he has no problem with her taking all the time she needs. He said he’s not sure when she will fight again.

“The way I look at this one is, Ronda has worked her ass off for us for the last three years,” White said. “She’s been fighting, promoting and building the sport. If anyone deserves the time off, it’s her. The night [of UFC 193] Holly said she’d do the rematch and that Ronda deserved it and everything else. So we were holding it for her if she wanted to do it.

“What that woman has done is above and beyond what anyone has done. I mean, it’s just unbelievable what she’s done in the last three years. Anything we needed, she didn’t say no to anything; said no to nothing. She even took over responsibilities somebody else was supposed to have. So when she tells me she wants more time, you know what? She’s got it.”

We will keep you updated on when Ronda Rousey is set to return to the Octagon.

Back To The Top