Finally, a potential first opponent has been announced for CM Punk’s debut fight in the UFC.

Mickey Gall is to be Punk’s first matchup but this will only happen if Gall is to beat Mickey Jackson. The 23-year-old takes on Michael Jackson in the preliminary fights on Fight Pass and should he be victorious, he will be made Punk’s first-ever UFC opponent.

Dana White spoke on TSN’s ‘Off The Record’ show:

‘They’re going to fight on the prelims, on February 6 on Fight Pass.

‘If he wins that fight, Mickey Gall will fight CM Punk. And CM Punk will be there at the fight to watch.’ 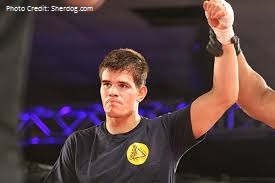 Gall’s fight against Mickey Jackson will be his first in the UFC. He recently won via rear naked choke on Dana White’s first episode of ‘Looking For A Fight’ Youtube series. He immediately told Dana White that he wanted to go on to become CM Punk’s first opponent.

White went on to say that if Gall is to lose against Jackson, he will not go on to face CM Punk:

‘He’s got to get through this fight, and it’s going to be a life changer for this kid.’

CM Punk’s debut fight is likely to be in the Spring. It is looking to be a sell-out event due to Punk’s huge popularity in the WWE before his transition into becoming a fighter within the UFC.