When the UFC returns to London on February 27th, the best stars in Europe will be loo 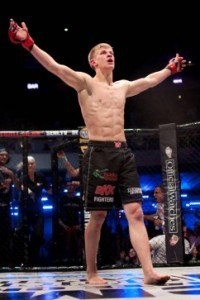 king to make a memorable impression on the English crowd. In today’s episode of Across The Pond, you will meet a fighter with massive potential. A professional since April 2012 and representing Tristar Gym in Canada, 21 year old Arnold Allen owns a 10-1 record in 11 career bouts consisting of five knockouts, three submissions and two decisions. Allen is best known for having fought for Cage Warriors from 2013-2014. In his MMA debut, he knocked out Nathan Greyson in the second round. Allen won his next two fights before signing with Cage Warriors in 2013. At Cage Warriors 56 in London, he submitted Andy Green in the first round. In his next fight for the promotion, Allen submitted Declan Williams via triangle choke in the second round at Cage Warriors 60. He won his next two bouts via knockout, defeating Doni Miller at Cage Warriors 61 and Tobias Huber respectively before picking up a decision win over Gaetano Pirello at Cage Warriors 71.. He closed out 2014 by defeating Paul Cook. In 2015, Allen signed with the UFC as a late replacement for Mike Wilkinson and faced Alan Omer at UFN 69 in Berlin, Germany and defeated him via submission in round three. He will now face Yaotzin Meza at UFN 83 on February 27th Good luck Arnold!

Mario 'Rudeboy' Saeed: I can’t wait to showcase my skills and put my opponent away quick