In my opinion, Scotland is quickly becoming a MMA hotbed. In today’s episo 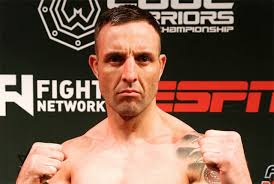 de of Across The Pond, you will meet a fighter whose hard charging fight style has earned him a fearsome reputation. A professional since November 2010 and representing Dinky Ninjas, Martin Delaney holds a 11-1 record in 12 career bouts consisting of three knockouts, three submissions and five decisions. In his MMA debut, he submitted Mark Young via rear naked choke in the first round. Martin won his next fight in just 38 seconds before picking up back to back knockout wins over Warren Mitchell and Alex Dallacosta respectively. He won his next three fights via decision which included wins over Paul Cook and Mamour Fall. Martin earned a second round submission over Thibault Colleuil before signing with Cage Warriors in 2014 to take on Damir Hadzovic at Cage Warriors 69. Martin went 3-0 in 2015 with two decisions and one knockout. In 2016, he signed with Full Contact Contender and will now face Tim Wilde for the Lightweight title at FCC 15 on March 5th. Good luck Martin!