When you are on a winning streak, you feel unstoppable. In today’s episode of A 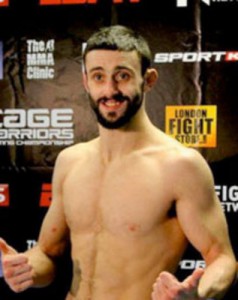 cross The Pond, you will meet a fighter whose relentless ground attack has him on the cusp of Cage Warriors gold. A professional since December 2008 and representing The MAT Academy Wales, Lew Long owns a 12-3 record in 15 career bouts consisting of six submissions, three knockouts and three decisions. Long is a popular Welsh fighter who is best known for having fought for Cage Warriors from 2012-2014. In his MMA debut, he submitted Ken Jacobs in the first round. Then, he submitted Josh Dennis. He won his next four bouts which included wins over Stuart Davies and Diego Vital respectively. In 2013, Long faced Mark Glover at 155 pounds at Cage Warriors 54 in Cardiff and defeated him via unanimous decision. He moved up to 170 pounds to take on Steven Dinsdale at Cage Warriors 72 and knocked him out in the second round. His most impressive performance under the Cage Warriors banner came when he submitted Matt Inman in the first round at Cage Warriors 73. Long went 3-0 in 2015 with two submissions and one knockout. He enters 2016 on a five fight win streak and I would not be surprised if he gets a shot at the Welterweight title when Cage Warriors returns on April 15th!