by Myles Painter
in Across The Pond
42

When a fighter sustains an injury, it is not necessarily the end of their fighting career. In today’s episode of Across The Pond, you will meet a former The Ultimate Fighter contestant who will be looking to make a triumphant return to the octagon at UFC London after a long layoff. A profession 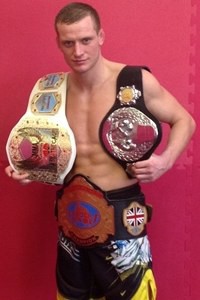 al since November 2008 and representing SBG Manchester and North East Vale Tudo, Davey Grant owns a 9-2 record in 11 career bouts consisting of eight submissions and one knockout. Grant is very adept with his ground game so you would be wise to not give him your back

In his MMA debut,he  submitted Gary Conlon via triangle choke in the first round. Then Grant submitted Nathan Thompson. He submitted his next four opponents before earning a knockout win over Rob Bunford. Grant returned to his ground game with back to back submissions of James Pennington and Danny Welsh respectively. In 2013, Grant was selected to be a part of The Ultimate Fighter 18 at 135 pounds. To gain entry into the house, he defeated Danny Martinez via armbar in the second round and was selected second overall by coach Rousey among male fighters. In episode five, he took on Louis Fisette of team Tate and submitted him in round two. He advanced directly to the finale to face Chris Holdsworth after Anthony Gutierrez missed weight. Grant will now lock horns with Marlon Vera at UFN 84 on February 27th. Good luck Davey!