In Mixed Martial Arts, a fighter should always expect the unexpected. 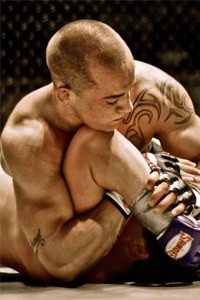 In today’s episode of Across The Pond, you will meet a fighter who delivers more than a few surprises and will be looking to put on a show at UFC London. A professional since August 2008 and representing Atherton Submission Wrestling, 28 year old Mike Wilkinson owns a 9-1 record in 10 career bouts consisting of three knockouts, four submissions and two decisions.

In his MMA debut, he submitted Tom Clarke via armbar in the first round. Wilkinson submitted his next three opponents before earning back to back knockout wins over Artem Lobov and Uche Ihiekwe respectively. After picking up a decision over Brian Moore, Wilkinson was selected to be a part of TUF Smashes at 155 pounds. In episode eight, Wilkinson faced team Australia’s Grant Blackler and submitted him in round one. For his Official UFC debut, he faced Brendan Loughnane at UFC On FX 6 and defeated him via unanimous decision. At UFN 53, Wilkinson faced Niklas Backstrom and knocked him out in the first round. He will now face Makwan Amirkhani at UFN 84 this Saturday. Good luck Mike!