When it comes to the ground game, a single mistake can cost you. In today’s episode 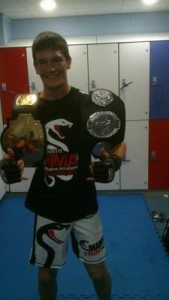 of Across The Pond, you will meet a fighter who can make his opponents pay the price if they tangle with him on the ground. A professional since August 2013 and representing Sukata MMA, Dez Parker holds a 6-4 record in 10 career bouts consisting of four submissions and three knockouts.

In his MMA debut, Parker submitted Nathan Wilson via armbar in the first round. He won his next three fights which included a first round knockout of Charlie Watts in his Cage Warriors debut at Cage Warriors 68 in 2014. In 2015, Parker knocked out Joe McCorley in round one at FCC 12. He also knocked out James Lewis in the first round at ICE  FC 6. Then Parker submitted Ant Davies late in round one at ICE FC 8. Parker will make his Full Contact Contender return when he squares off with Rastislov Toth at FCC 15 on March 5th. Good luck Dez!