by Peter Knox
in MMA News
8 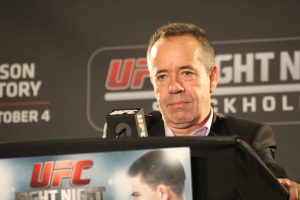 The International Mixed Martial Arts Federation (IMMAF) has appointed David Allen as its new Director of Brand and Commerce.

The IMMAF is the international democratic governing body for the sport of MMA, founded from within the MMA community for the MMA community. Since its formation in 2012 the organisation has grown to a membership of 50 nations and has hosted three international Amateur MMA championships. With Olympian judokas, Kerrith Brown and Densign White, at the helm as President and CEO, an international board representing the global grassroots MMA community, and with support from the UFC, IMMAF boasts a strong technical and sporting foundation.

Previously David Allen was Senior Vice President and General Manager to the UFC in Europe, Middle East and Africa (EMEA). The role saw him responsible for the development and expansion of the organisation within the region through broadcast partnerships, live events, digital and social media engagement plus commercial partnerships. Allen headed the UFC’s first-ever show in a European stadium, Stockholm’s Tele2 Arena, headlined by Alexander Gustafsson vs. Anthony Johnson. The event drew a live gate of 30,000 fans and ticket sales of $3.1 million, making it the richest in the company’s history on the continent. He was responsible for the first all-women’s UFC title fight in the EMEA, between champion Joanna Jedrejczyk and challenger Jessica Penne for the Strawweight title in Berlin; as well as leading the charge on sell out Fight Nights in Dublin, London, Krakow and Abu Dhabi.

Born in Dublin, Allen kicked off his sports career with sportswear manufacturer Adidas in 1994. In 1998, he made the move to Nike where he held sales positions in the UK and EMEA business ahead of his promotion to General Manager of Nike Football EMEA in 2006. In this role, Allen led the team to over $1 billion in sales and the market leader position in the critical markets of UK, Italy, France and Spain. In 2010, Allen took on a new challenge within the Nike family and accepted the role of General Manager EMEA and USA for the UMBRO brand. He was responsible for creating the vision of the UMBRO brand, growing revenues, developing and delivering turnaround strategies to key markets.  Allen first joined the UFC in December of 2013 as Director of Events, Marketing and Communications for EMEA.

“We are very excited to welcome David to IMMAF, with his vast commercial experience. MMA has seen unprecedented growth as a sport over the last decade; and IMMAF, as a global governing body, is facing great demand to expand at faster rate and provide a greater volume of services to its increasing membership. While IMMAF has made pioneering achievements for MMA and rests on a strong technical, sporting and ethical foundation, in order to meet demand in 2016 and reach our next targets, commercial growth will be a key driver. IMMAF has developed the core elements of a unique and innovative brand, and has an expanding broadcast footprint. The knowledge and experience that David will bring to IMMAF, will enable us to harness these elements to raise the IMMAF and IMMAF Championships brands to a whole new level. In turn this will help to increase IMMAF’s resources so that we can provide the best possible support and services to our membership and the development of MMA from the grassroots up to the professional level.”