Queen Of The Rockies 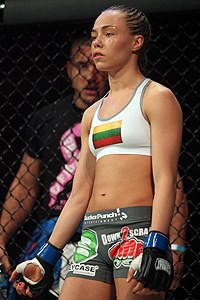 d to PaigeVanZant. In today’s episode of Across The Pond, you will meet a fighter whose relentless submission attack has quickly turned her into a force to be reckoned with. A professional since January 2013 and representing Grudge Training Center in Colorado,  23 year old Rose Namajunas owns a 4-2 record in six career bouts with all four of her wins coming via way of submission.

In her MMA debut at Invicta FC 4, Rose submitted Emily Kagan in round three. She also submitted Kathina Catron in just 12 seconds at Invicta FC 5. Rose was a part of The Ultimate Fighter 20. She was selected fourth overall by coach Gilbert Melendez. In episode seven, Rose faced Alex Chambers and submitted her via rear naked choke in just 22 seconds. In the quarter finals, she faced Joanne Calderwood and submitted her in round two. In the semi finals, Rose faced Randa Markos and submitted her in the first round. In 2015, she rebounded with a first round submission of Angela Hill at UFC 192. In what has been her most impressive performance to date in the UFC, Rose faced PaigeVanZant in the main event of UFN 80 and submitted her in round five via rear naked choke. Rose will look to continue her winning ways when she faces Tecia Torres at UFC on Fox 19 this weekend. Good luck Rose!