In my opinion, the return of Cage Warriors marked the beginning of a new era for European MMA under the leadership of president Graham Boylan. 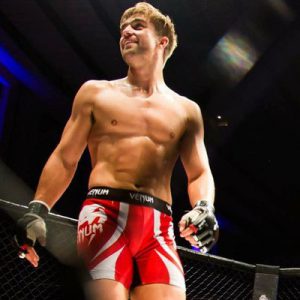 In today’s episode of Across The Pond, you will meet a fighter who is poised to take the Cage Warriors Lightweight division by storm. A professional since February 2014 and representing London Shootfighters,  Alfie Davis own a 5-1 record in six career bouts consisting of two knockouts, two submissions and one decision.

In his MMA debut, Alfie submitted Cilas Matos in the third round. He also submitted Aaron Brett via triangle choke in the first round. Davis went 2-0 in 2015 with a decision win over Lukas Beinias and a second round knockout of Kostadin Enev respectively,. In his Cage Warriors debut at Cage Warriors 75 in London, Davis met Terry Doyle and knocked him out in the second round in spectacular fashion. One thing is for sure, Cage Warriors has a budding superstar on their hands with this Lightweight powerhouse!