Fighters achieve their goals through hard work and determination. In today’s episode of 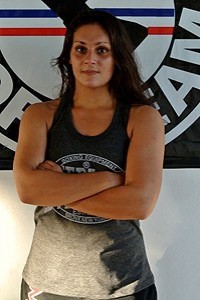 Across The Pond, you will meet a gritty fighter who is blazing her own path to stardom on the latest season of The Ultimate Fighter. A professional since May 2013 and representing Andy Roberts BJJ, 29 year old Helen Harper holds a 4-1 record in five career bouts consisting of two knockouts, one submission and one decision.

In her MMA debut, Helen submitted Zhen Wei Foo in the third round. She knocked out Liezel Lumindas and Nayra Acosta in the first round. In 2015, Helen picked up a unanimous decision win over Sofie Langsford. In 2016, Harper was selected to be a part of TUF 23 as part of the new crop of Straweights coached by Joanna Jedrzejczyk and Claudia Gadelha .  To get into the house, Helen faced Amy Montenegro and defeated her via armbar in the first round. She was selected fourth overall by coach Joanna. Harper will face fellow Englishwoman Lanchana Green next Wednesday on Fox Sports 1, looking to give team Joanna their first win of the season. Good luck Helen!