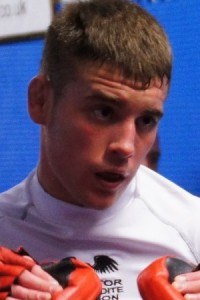 Heart Of A Warrior 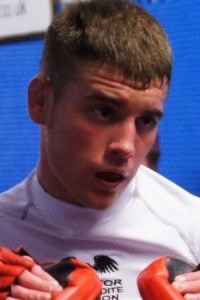 en they might be called to step up to the plate. In today’s episode of Across The Pond, you will meet a fighter looking to electrify the crowd when Cage Warriors returns to Wales on June 4th. A professional since February 2010 and representing Tillery Combat MMA led by head coach Richard Shore, Kris Edwards owns a 8-8 record in 16 career bouts consisting of five submissions, two knockouts and one decision. Kris is best known for his time in Cage Warriors.

Edwards picked up back to back first round knockout wins over Jamie Barrett and Craig Allen before submitting Chris Garry via triangle choke in round one. He earned three wins in 2011 which included submission wins over Cage Warriors veterans Spencer Hewitt and James Brum and a second round rear naked choke win over Greg Knapp. At Cage Warriors Fight Night 5 in 2012, Kris faced Janne Elonen Kulmala of Finland and defeated him via unanimous decision. Then, he dropped to Flyweight to take on Brian Hyslop at Cage Warriors 48 in London. Edwards defeated Hyslop via armbar in the second round. He will make his Cage Warriors return after a two year absence when he faces Sam Creasey at 135 pounds at Cage Warriors 76 on June 4th. Good luck Kris!

Q And A with Kris-

What are your thoughts on your opponent Sam Creasey?

I don’t really know anything about my opponent. I treat them all with a mutual respect and don’t look over anyone.  This fight is about me.  I know he’s got a nice record and that’s about it. You can look into people as much as you want, but every fight is different and I know when I’m 100% prepared I’m as good as any. Me and my team are prepared for it to go anywhere.

I started training muaythai and bjj back in the day upstairs in a pub when shows & comps & gyms etc where few and far between.  I was 14 and I knew I wanted to get in the octagon there and then even though we were fighting in rings back then as the little domestic shows didn’t have a cage and that’s where it all started.
Tell us one interesting fact about yourself.
An interesting fact about me … Uummm I don’t think there is any interesting facts really. There’s no doubt there’s a few stories people could retell on the mma scene from shows & comps, haha , because I like to have a laugh and enjoy myself. But the one fact is when I’m focused and prepare correctly I’m a tough fight for anyone.

Is there one breakout moment or person  in your career that has impacted you the most?

There are a few moments that have impacted me in fights etc and there’s no one to blame but myself.  I have a lot of people that have impacted me through my career and I thank them all.   Richard Shores’ guidance and persistence with me as impacted me the most as he knows my potential  and has always given me support and advice throughout. Not just for fighting but in general and I thank him for it.  I also thank everyone who’s supported me win or lose !! We are only a small community but they don’t have get behind me and the boys at Tillery Combat and anybody from our little town who’s trying to do good at whatever it may be. I’ve made loads of friends for life, met loads of cool people and made some great memories.  So I’d say it has all impacted me.