The more you train in Mixed Martial Arts, the better you will become. In today’s episode of Across The Pond, you will meet a fighter whose hard work and dedication to 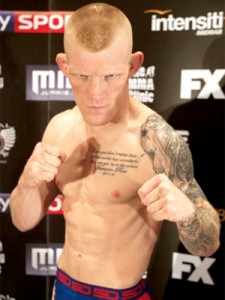 the sport has transformed him into a powerful workhorse. A professional since May 2010 and representing North East Vale Tudo, 31 year old Liam James owns a 9-6 record in fifteen career bouts consisting of five submissions and four decisions. Liam is best known for his time in Cage Warriors from 2012- 2014.

In his MMA debut, Liam submitted Dean Malham in the first round. He also tapped out Josh Harrop in just 17 seconds. Then Liam picked up a first round submission win over Johnathan Faivre. In 2011, James earned back to back submission wins over Danny Welsh and Declan Tilson respectively. In his Cage Warriors debut, he faced Frenchman Jean N’ Doye at Cage Warriors Fight Night 5 in Jordan and defeated him via split decision. In 2013, Liam scored consecutive decision wins over Stephen Coll at Cage Warriors 55 and Akhad Mamedov at Cage Warriors 58 respectively. James returned to the promotion in 2014 to take on Dean Trueman at Cage Warriors 73. He defeated Trueman via unanimous decision. This steady and gritty workhorse proves that if you put in the work, it will pay off!