Fighters need to stay as prepared as possible to gain experience.  In today’s episode of Across The Pond, you will meet a fighter whose versatile style and experience  makes him very tough to deal with on any given night.  A professional since January 2005 and representing 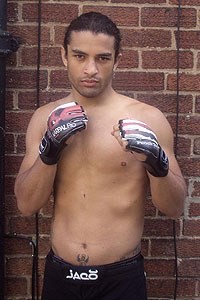 In his MMA debut, Jason defeated Dave Campos in the first round via TKO.He also knocked out Mark Spencer in round one. In 2006, Jason won four fights which included wins over Paul Cooper and Dave Hirst respectively. Ball submitted Kam Atakuru via triangle choke in the first round. Then he scored consecutive submission wins over Aaron Barrow and Paul Jenkins respectively. In 2008, he won three fights which included wins over Peter Angerer and Aidan Marron respectively. Jason knocked out Glenn Mincer in round three. He won his next four fights which included a knockout win over BAMMA and Cage Warriors veteran Tim Newman. In 2011, Jason faced Peter Duncan at BAMMA 5 and knocked him out in the second round. He submitted Craig Allen via keylock  just 41 seconds into round one. At Cage Warriors 53 in Glasgow, Ball squared off with Jason Cooledge and submitted him via rear naked choke in the first round. Weather on the ground or on the feet, this crafty veteran has it all!