The UFC Straweight division is known for action packed fights. In today’s episode of Across The Pond, you will meet a fighter looking to continue her momentum in the UFC when they 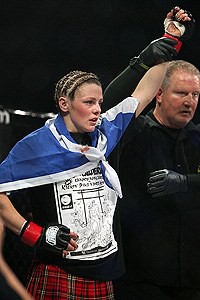 In her MMA debut, JoJo knocked out Noelia Molina in the first round. Then she earned a decision win over Lena Ovchynnikova. Calderwood defeated Ainara Mota via knockout in the second round. In her Invicta FC debut, she faced Ashley Cummins at Invicta FC 3 and knocked her out in round one. She also defeated Livia Von Plettenberg at Invicta FC 4. At Cage Warriors 53 in Glasgow, Calderwood faced American Sally Krumdiack and knocked her out in the first round. She returned to Invicta FC and scored consecutive decision wins over Norma Rueda Center at Invicta FC 6 and Katja Kankaanpaa at Invicta FC 7 respectively. In 2014, Calderwood participated in The Ultimate Fighter 20 and was selected third overall by coach Anthony Pettis. She defeated Emily Kagan via decision in episode two. In her UFC debut, Calderwood faced Korean fighter Seo Hee Ham and defeated her via unanimous decision. Then she faced Cortney Casey at UFN 72 in Glasgow and defeated her via unanimous decision. Calderwood will now face Valerie Letourneau at UFN 89 this weekend in what promises to be a fast paced, action packed battle.Good luck JoJo!

Battle of the Best