by Myles Painter
in Across The Pond
11 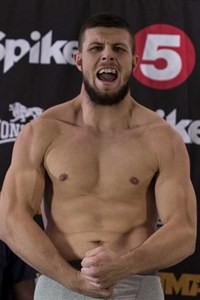 ‘s episode of Across The Pond, you will meet another talented Northern Irish MMA fighter  whose ground skills make him a serious prospect at 205 pounds. A professional since November 2011 and representing Fight Academy Ireland and Team Torres Jujitsu, 24 year old Karl Moore owns a 6-1 record in seven career bouts consisting of four submissions, one knockout and one decision. Karl is best known for his time in Cage Warriors.

In his MMA debut, Karl submitted Rimantas Pukas via triangle choke in the first round. Then he tapped out Washington Ferreira via rear naked choke in round two. Moore also submitted Cyril Asker. At Cage Warriors 62, he knocked out Richie Knox in the first round. He also defeated Loyd Clarkson via unanimous decision at Cage Warriors 70. In 2015, Karl submitted Frenchman Prince Aounallah in round one via arm triangle choke at Venator FC 2. When this behemoth drags you to the mat, you are in for a rough night!