Stepping into the Spotlight

by Myles Painter
in Across The Pond
22

On July 16th, Bellator MMA will make their debut in London with a card chalked full of England’s top talents. In today’s episode of Across The Pond, you will meet a young fighter hoping to sho 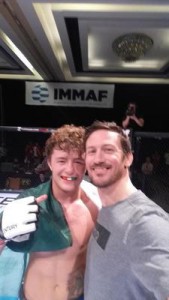 w the English crowd why he is considered a top European prospect.  A professional since October 2015 and representing SBG Ireland, 19 year old James Gallagher owns a 3-0 record with all three of his wins coming via way of submission.