by Peter Knox
in ACA
0 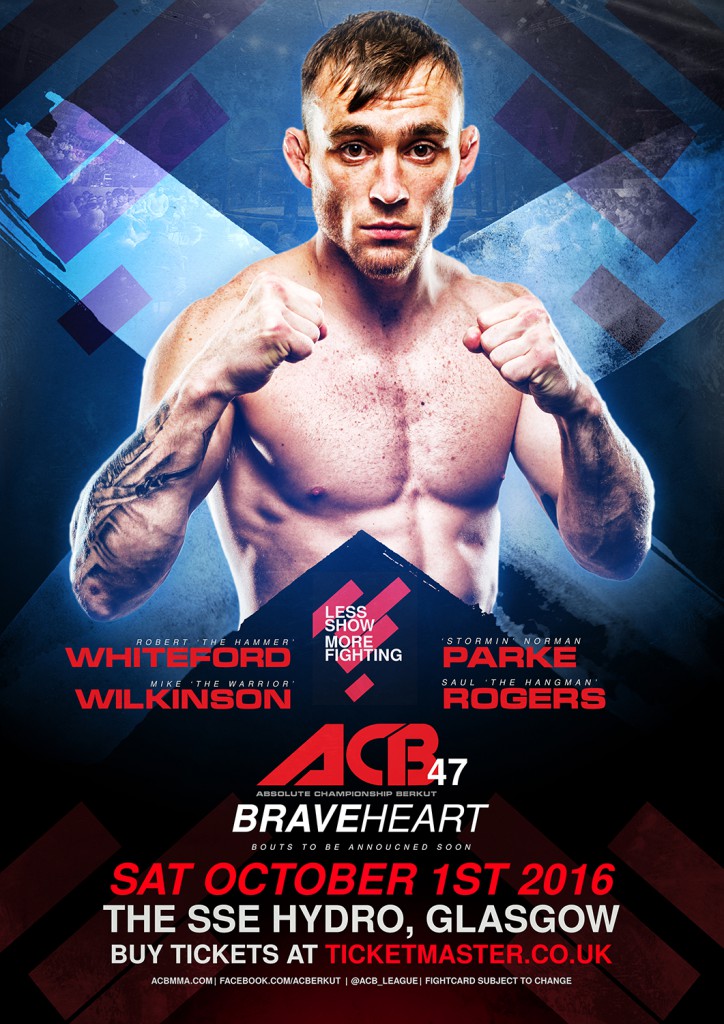 On October the 1st the Hydro Arena in Glasgow will lay host to what will go down as one of the most historic events in Scottish Mixed Martial Arts (MMA) as Russian based promotion Absolute Championship Berkut (ACB) brings Scottish and UK fans a packed card that will see a Scotsman headline a card for a major MMA promotion for the first time.

ACB are one of the top 5 largest MMA promotions on the planet with a huge following in Russia, mainland Europe and Asia and with this first step on to UK soil they are looking to catch the eyes and hearts of UK fans as well. To do that they are lining up a stacked card with names that MMA fans will know well. Already confirmed for this event are top fighters Norman Parke, Saul Rogers, Mike Wilkinson and the headliner, Scotland’s own, Robert Whiteford.

Whiteford will yet again lead the charge for Scottish MMA and his trademark walk out to ‘Flower of Scotland’ whist being draped in the Saint Andrews Cross he loves so much will be a sight (and sound!) to behold as he steps out in front of his hometown fans to headline this event and to represent his country once more.

ACB were so impressed with the Scottish fans and Whitefords following that making the decision of which city to debut in the UK with was an easy one. With their moto of ‘Less Show, More Fighting’ they believe they have a product that Scottish and UK fans will fall in love with and it all starts on October the 1st in Glasgow at the Hydro Arena.

More big names from the Scotland, the rest of the UK and abroad have been contracted to this card and tickets go on sale on
Wednesday 10th Aug @ 9am – SSE rewards pre-sale
Thursday 11th August @ 9am – The SSE Hydro pre-sale
Friday 12th August @ 9am – general on sale
and you can get them via TicketMaster here