by Myles Painter
in Across The Pond, UK MMA News
7

The scope of Welsh MMA has been broadened due to two visits to Welsh soil by Cage Warriors in 2016. 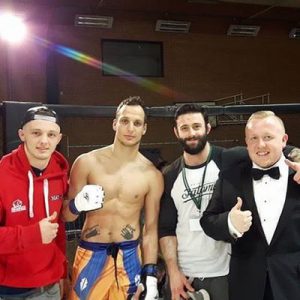 In today’s episode of Across The Pond, you will meet a young up and comer whose dazzling submission skills have him on the verge of becoming Cage Warriors next Welsh standout. A professional since April 2013 and representing The MAT Academy,  Aaron Khalid owns a 5-2-1 record in seven career bouts consisting of three submissions, one knockout and one decision. Aaron is a team mate of Cage Warriors veteran Lew Long.

In his MMA debut, Aaron knocked out Wayne Drake in the first round. Then he defeated Mark Finney via unanimous decision.  Aaron earned consecutive submission wins over Wayne Drake and Kyle Benger respectively. In his Cage Warriors debut, Aaron faced Adam Proctor at Cage Warriors 79 and submitted him via rear naked choke in the second round. This slick grappler is one to watch for the future in Cage Warriors Welterweight division!