The growth and popularity of women’s MMA has exploded over the years with the rise of Invicta FC. In today’s episode of Across The Pond, you will meet a well rounded,scrappy fighter looking to become th 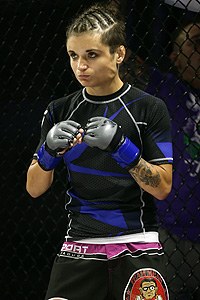 In her MMA debut, Julia defeated Jenny Silverio via unanimous decision. She also defeated Alyssa Garcia via split decision. Then Julia submitted Diana Rael via rear naked choke in the second round. She defeated Paulina Granados via unanimous decision. At Invicta FC 19, Julia faced Stephanie Skinner and submitted her via rear naked choke in round one. This female prospect is definitely a name to follow heading into 2017!