Mixed Martial Arts is a journey that requires a tremendous amount of personal sacrifice.  In today’s episode of Across The Pond, you will meet a ferocious fighter who has quickly become an all out force to be reckoned with in Invicta FC. A professional since November 2013 and representing Glory MMA and Fitne 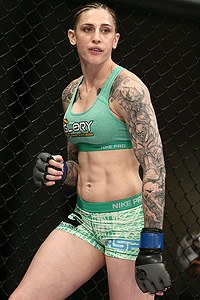 Megan defeated Janay Harding via unanimous decision. She also defeated Kerry Barrett via decision. Megan picked up back to back submission wins over Jodie Struzik and Zoie Shreiweis respectively. At Invicta FC 15, Megan faced Amber Leibrock and defeated her via TKO in the third round. Anderson also defeated Amanda Bell via TKO in round one at Invicta FC 17. At Invicta FC 18, Megan faced TUF 18 competitor Peggy Morgan and defeated her via a brutal TKO in the first round, extending her win streak to three. The Invicta FC Featherweight division needs to watch out for  this fearsome Aussie!