Since Invicta FC launched with their debut show in 2012, they have steadily earned a reputation for being the premier destination in women’s MMA. In today’s episode of Across The Pond, you 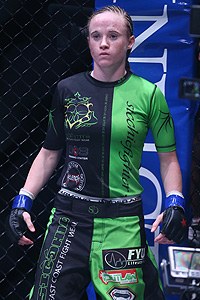 will meet a young, hungry fighter looking to cement her status as one of Colorado’s top female prospects. A professional since September 2014 and representing 303 Training Center, 24 year old JJ Aldrich owns a 4-1 record in five career bouts consisting of two knockouts and two decisions.