At UFC 200 Brock Lesnar returned to the UFC, he faces off against the super Samoan Mark Hunt. Before the bout even began Hunt was very public about his concerns about Lesnar’s potential suspected use of Performance enhancing drugs…

Three frustrating rounds later and a clear Decision loss for hunt, news surfaced that the WWE superstar had failed, not one, but TWO drug tests. One was administered before the fight and one on the night. The Nevada State athletic commission say the banned substances were, clomiphene and hydroxy-clomiphene.

Although Lesnar was given a provisional suspension and possible sanctioning from the USDA Hunt wanted further action taking. In an interview with Fox Sports Hunt said “You think this is about money? I’ve turned down two fights already. This is about what’s right. I wanted to put a provision in for the JDS (Junior dos Santos) fight, but they wouldn’t do it. These cheaters need to be punished. I would think that the commission would stand right by me. I don’t understand why they don’t do something about it.

The contract I sign says no doping but how about enforcing these contracts with harsher penalties. I love fighting, this is my life and I love doing it but it’s really important to do this.”
In short, Mark Hunt wants the cheating party’s purse to be handed over to the none cheating party… 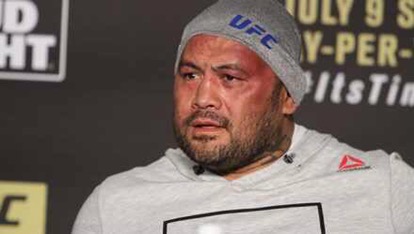 Hunts Attorney Christina Denning, a partner at Higgs, Fletcher and Mack explained what Mark Hunt wants to achieve and what it would mean, “A change in all future bout agreements, such that if a competitor’s caught doping then the proceeds from the fight, whether that’s just the purse or if there’s a win bonus or there are pay-per-view proceeds, whatever compensation the cheating fighter receives, he wants a provision in all future bout agreements for him and he’d like to see it across the board that the compensation be forfeited to the non-cheating party. So that’s the first thing,”

“The second thing would be some sort of compensation with what happened at UFC 200. I can tell you with respect to the whole where he’s coming from and the rationale and purpose behind why he wants to see both those things happening is because right now, the UFC has an anti-doping policy that isn’t being enforced to its maximum potential in order to deter people from getting into the ring. In fact, what’s happening is fighters appear to be taking advantage of the system and doping and either knowing or risking or banking on the fact that they’re not going to get the maximum penalty imposed by the UFC. ”

“In the case of the UFC, it would go back into the anti-doping program. In the case of the Nevada Athletic Commission, it would go into the state fund. But neither one of those organizations are doing anything and then you have situations where competitors like Brock Lesnar are just coming in for a one hit wonder at UFC 200, largest grossing purse and huge pay-per-view turnout, and then doping, getting caught and the penalties aren’t being enforced.”

Hunt is the firmest supporter of this needed change after now facing 3 opponents who have been caught doping, Frank Mir, Antonio ‘big foot’ Silva and Brock Lesnar! Hunt says he doesn’t want to go the legal route, he wants to fight, it is what he loves. The Samoan just wants to be heard, and a protocol to be in place to protect the sport and its Athletes.

World Record Attempt - Most Kicks On Themselves