by Frankie Anderson
in UFC
34

Miesha Tate, who has shared the Octagon with both Nunes and Rousey told MMAJunkie,  that she would like current UFC women’s bantamweight champion Amanda Nunes to beat Ronda Rousey at UFC 207 on December 30th in Las Vegas. Tate said –

“I know that Amanda is a very solid fighter and she hits like a ton of bricks,” Tate said. “She’s a very worthy opponent. It should be interesting. … I want Amanda to win. She’s a sweetheart and a good girl. I think she deserves it.”

Tate retired from fighting at UFC 205 in New York after her defeat to Raquel Pennington. 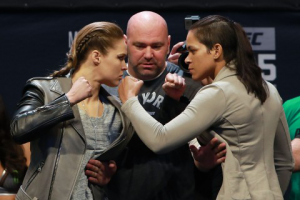 Russian Rock-Paper-Scissors (slapping each other)