by Peter Knox
in MMA News
35

A martial arts fighter who brutally beat up his girlfriend and left her with broken ribs has been jailed for 13 months. 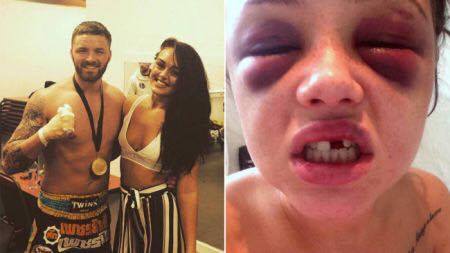 Brogan Sloan, 21, had been out with her boyfriend Dominic McCluskey, 21, on a night out before they returned home and went to sleep.

But while Brogan slept, McCluskey searched through her mobile phone and read old messages before punching, kicking and dragging her across the bedroom, Newcastle Crown Court heard.

The young mum was left with broken ribs, a missing front tooth, a fractured nose, a swollen face and two black eyes.

‘All I could see and taste was blood. I had a missing tooth and I could hardly breath. Dominic knew exactly what he was doing as he was a K1 fighter.

Prosecutor Neil Jones told the court: ‘She put her phone under the pillow before she went to sleep and she woke up to find she was being attacked in a sustained manner.

‘It was a sustained assault lasting around one hour. He threw her to the bed, breaking her pyjamas. She felt her tooth was missing and there was blood all over her face.

‘She has suffered from insomnia since the attack and she was nervous that her son would be scared of her because she looked completely different due to the swelling on her face.

‘She could not care for her son until seven days after the attack. He also damaged Miss Sloan’s property whilst she was unconscious and also damaged a tablet at the police station whilst he was resisting arrest.’

Stephen Duffy, defending, said: ‘None of his previous convictions are to do with domestic abuse – this was a sudden loss of temper on his part. It was out of character.’

Sentencing him to 13 months in prison, Recorder Darren Preston said: ‘This was a prolonged, vicious and sustained attack.

‘There was a sustained and repetitive nature to this. She had many injuries, serious injuries and she lost a tooth. Domestic abuse is a very serious offence.’

Brogan said: ‘I am happy he has been given a prison sentence but it is not justice served. I could have died, it could have been a lot worse than it was.

‘He should have been given a lot longer than 13 months. It’s a bit of a joke really. He deserves to be punished and locked up for a long time for what he did to me.’

Written by Tanveer Mann for metro.co.uk