Well that escalated quickly, Yesterday,  Tony Ferguson let the UFC brass and everyone else who would listen that he has plans to coach the ultimate fighter opposite long standing and undefeated lightweight contender (and long time rival) Khabib Nurmagomedov with an interim title bout at the close of the show, following new UFC 155lb Champ Conor McGregor announcing he is to take an extended hiatus.

Khabib must have gotten wind of Fergusons future plans for the two and took to social media to retort, calling Ferguson a “Chicken”.

Hello chicken @TonyFergusonXT all this gangster talk but why you no want to sign the contract? It’s ok I kill u fast @danawhite@seanshelby

Tony Ferguson was quick to respond however, posting on social media “@TeamKhabib @danawhite @seanshelby I Was Ready For Jan Ace, Your Puss Had Too Much Sand In It Still From The Last Fight. You Talk Too Much

Both fighters have been on an impressive tear in arguably the most talent rich, in depth division in the sport, beating a who’s who of opponents on what seems to be the road to each other, Ferguson coming off an impressive win of former (and what most believed to be long standing) 155 Champ Rafael dos anjos and undefeated in 24 pro fights Khabib Nurmagomedov (8-0 UFC) who is coming off the viscous destruction of Michael Johnson (Sub rd 3) (Kimura).

Both men were scheduled to face off in April and Khabib was quick to remind Ferguson of this who pulled out from the fight, “I was ready in April main event on fox and you pulled out” .https://twitter.com/tonyfergusonxt/status/808450887794294784 …

The verbal sparring ended there but Tony Ferguson was far from finished, taking to FOX Sports, referring to Nurmagomedov’s undefeated record as “padded” and discrediting his overall MMA game.

“I’ll take his 24-0 record – it’s [expletive] padded dude. Look at some of the legit fights he’s had and then look at mine. I’ll take my record over his any day. His record is so padded. He’s a paper champ. Get out of here.

“Khabib’s got sambo not wrestling. My wrestling is far superior to his… Forcing somebody to shoot, that puts him into snap down city territory. For me unless you know the detour route to that place, you’re not going to survive.

With all the hype surrounding the two and the streak both are on, with the verbals coming in thivk and fast, its hard to imagine the two not facing each other in the near future and the winner getting the “lottery ticket” amd inevitably “red panty night” with Conor McGregor. 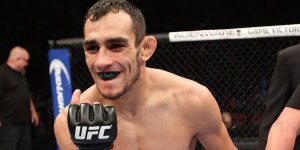