With Invicta FC quickly becoming the leading Women’s MMA promotion, some of 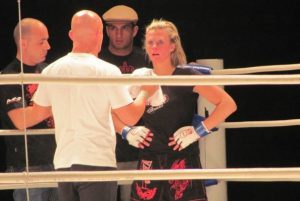 Europe’s top prospects are coming aboard to help make the promotion even more of a global brand. In today’s episode of Across The Pond, you will meet a ferocious fighter whose dangerous striking and impressive submissions make her a lethal European prospect. A professional since January 2009 and representing Perfect MMA Team, 32 year old Cindy Dandois owns a 8-2 record in ten career bouts consisting of four submissions, three knockouts and one decision.