by Myles Painter
in Across The Pond, UK MMA News
28

When a fighter begins their MMA career, finding a coach and gym that plays to their strengths and helps them learn and grow as an individual is vital to their success as much as their own internal drive. 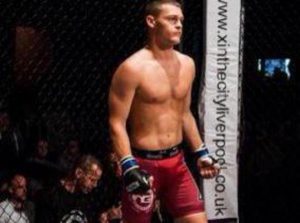 In today’s episode of Across The Pond, you will meet a tireless fighter whose well disciplined attack coupled with first class work ethic makes him one of England’s up and coming Lightweight prospects. A professional since October 2012 and representing Next Generation Liverpool under Paul Rimmer, Ellis Hampson owns a 6-3-1 record in nine career bouts consisting of two submissions, two knockouts and two decisions.

In his MMA debut, Ellis defeated David Kane via TKO in the first round. Then he submitted Sam Cairns in round one followed by a second round TKO of Ash Griffiths. In 2015, Ellis submitted Ian Williams via rear naked choke in the first round followed by a unanimous decision victory over Frenchman Jean Loua at ICE FC 9. Hampson made his return to Cage Warriors in 2016 at Cage Warriors 78 in Liverpool against Jordan Miller, defeating him via unanimous decision. This disciplined fighter is poised to add his name to the growing list of Next Generation monsters looking to do England proud in 2017!