In Mixed Martial Arts, the teammates and coaches a fighter has around them is essential to their mindset and overall success. 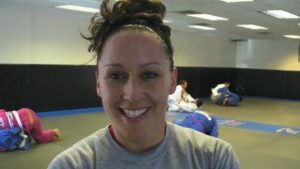 In today’s episode of Across The Pond, you will meet a gritty Southwest MMA fixture whose strategic style and ability to adapt in tough situations make her one of New Mexico’s leading ladies.   A professional since April 2011 and representing Jackson-Wink MMA under world class MMA coaches Greg Jackson and Mike Winklejohn in Albuquerque, New Mexico, 30 year old Jodie Esquibel owns a 5-2 record in seven career bouts consisting of four decisions and one knockout.