Dublin, Ireland continues to maintain a high standard of excellence when it co 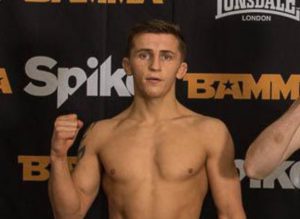 mes to producing top notch MMA prospects. In today’s episode of Across The Pond, you will meet a hungry fighter looking to leave his own mark on the Irish MMA scene. A professional since October 2015 and representing SBG Ireland, Blaine O’ Driscoll owns a 3-1 record in four career bouts consisting of two decisions and one knockout.