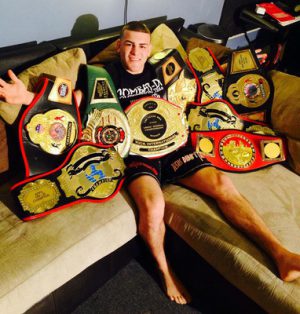 rospects with plenty of heart and grit. In today’s episode of Across The Pond, you will meet a rampaging Flyweight prospect whose versatility and drive to make his city proud have him on the verge of a UFC call up. A professional since March 2016 and representing Combat Do, 24 year old Jose Torres owns a 4-0 record consisting of two knockouts, one submission and one decision. Jose is the Titan FC Flyweight champion.

In his MMA debut at Titan FC 37, Jose submitted Travis Taylor in the first round. Then he defeated Reynaldo Walter Duarte via unanimous decision at Titan FC 38. At Titan FC 40, Jose defeated Abdiel Velazquez in the second round via TKO to capture the interim Flyweight title. In his first title defense, Torres faced UFC veteran Pedro Nobre in the main event of Titan FC 43 and defeated him via TKO in the first round. Jose is definitely knocking on the UFC‘S door!