by Myles Painter
in Across The Pond, Cage Warriors
0

On March 4, Cage Warriors will return to Irish soil following a three year absence. In today’s episode of Across The Pond, you will meet a cannon-like fighter whose brutal knockout p 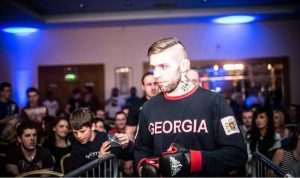 ower has him touted as  Ireland’s next breakout star. A professional since February 2016 and representing Muskerry Judo Sambo Club, Lloyd Manning owns a 2-0 record with both of his victories coming via knockout  in the first round.

In his MMA debut at BAMMA 24, Lloyd knocked out Frenchman Nicholas Ott in the first round. Then at Cage Warriors Unplugged he defeated Nathan Sparks via TKO in round one. Lloyd will aim for his third straight victory when he faces Paull McBain at Cage Warriors 81 on March 4 in Dublin.Good luck Lloyd!

What are your thoughts on your opponent Paull McBain?

I have no thoughts on the man.  I’m focused on my fight and my training and he’s just another body in the way.

What are some of your favorite fights of all time?

Some of the older ones I used to love watching. Matt Hughes was always a favourite of mine, but I will watch any Genki Sudo fight all day.

I left England were I was a full time judo player and decided I’m going for MMA.  I tried out two clubs near me and decided for the better one, in my opinion, the MMA clinic it was called then. Basically I trained for a few months and went into a tournament for the Best in Ireland to represent the country at the Worlds and I won.

What is the best piece of career advice you ever received?

Don’t stop until he is on the ground and the ref is pulling you off.