GSP’s return: is the decision to come back a wise one? 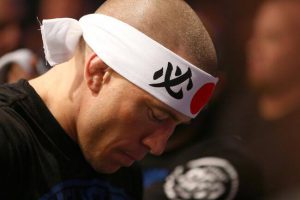 After more than three years away from the cage, news broke this week that Georges St. Pierre has signed a new contract and will return to the UFC.

Following a tough title defence against Johny Hendricks at UFC167, the man who had ruled the welterweight division with an iron fist for the best part of a decade decided to take some time away, leaving many to question whether we’d see one of the sport’s most iconic figures compete again.

For fans of the living legend, news of their hero’s return will be cause for celebration. For the UFC, which is currently lacking PPV pulling power with Conor McGregor and Ronda Rousey unavailable, wrapping up the deal to bring back their former number 1 draw will come as a major relief.

But as exciting as the return of one of MMA’s most popular figures is, after nearly four years away is a comeback the wisest decision for the man himself?

At nearly 36 years of age, time is not exactly his ally. In his final fight against Hendricks – a fight where many thought Hendricks should’ve got the judges’ nod– the usually dominant St. Pierre struggled to impose himself and it seemed father time was finally beginning to catch up with this once untouchable fighter.

Granted, the Hendricks that night was a different beast to the one that has since gone on to lose to the likes of Neil Magny and Kelvin Gastelum. But GSP’s final performance lacked its usual poise and control, and it seemed that if the best welterweight of all time wanted to retire at the top, now was probably a good time to say bid farewell.

Which is what makes the decision to come back now a bit of an eyebrow raiser. In an ever-evolving sport where the athletes at the top of the food chain are constantly improving, it’s difficult to return after a lengthy lay off and reassume your position at the top of the ladder. Just ask Ronda Rousey.

The former bantamweight Queen initially lost her title in a one-sided beat down to Holly Holm, but after taking a year off to prepare for her comeback Rousey returned to face a whole new level of competition against Amanda Nunes at UFC205. The bar had been raised, the game has already passed her by and with St. Pierre spending so long sitting on the sidelines, when he makes his return to the cage it could prove very difficult to compete with the likes of Tyron Woodley and Stephen ‘Wonderboy’ Thompson, the current alpha males of the 170lbs division.

There is, however, the possibility that the lay off has done St. Pierre some good. In the interview following his last fight he painted a picture of a man that had fallen out of love with competition and some time off could be just what he needed to get the fire burning again, but the odds appear to be against him.

So often fighters refuse to listen to what their body is telling them, continuing to compete despite their advancing age and declining skills until somebody steps in and convinces them to call it a day. One example that springs to mind is Chuck Liddell whose retirement had to be forced upon him by Dana White, who felt the ‘Iceman’ had given enough to the sport and the time to hang ‘em up was nigh. In combat sports such decisions can eventually save somebody’s long-term health.

It’s so rare in the sport of MMA that fighters retire on the top, as champion, especially in the UFC – the world’s premier MMA promotion. But that’s exactly what GSP did and whilst it’ll be impossible to taint a legacy that will stand long after he eventually calls it quits, the iconic French Canadian may well end up wishing he’d bowed out at the very pinnacle of the sport, when he had the chance.