The Scottish MMA scene is rich with up and coming promotions like On Top and SFC. I 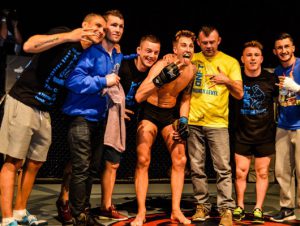 n today’s episode of Across The Pond, you will meet a heavy handed knockout artist looking to stir things up at 155 pounds. A professional since May 2016 and representing Higher Level Martial Arts under James Doolan, Stevie Mcintosh owns a 3-0 record with all three of his victories coming via knockout.

In his MMA debut at On Top Frontline, Stevie defeated Wes O’ Neil via TKO. He also defeated Scott Richards via TKO at On Top Weekender. At Headhunters FC, Stevie defeated Spanish fighter Isidro Sanchez via TKO in round one. This relentless Lightweight is ready to wreak havoc and leave a trail of destruction in his wake!

UFC to return to Glasgow in July