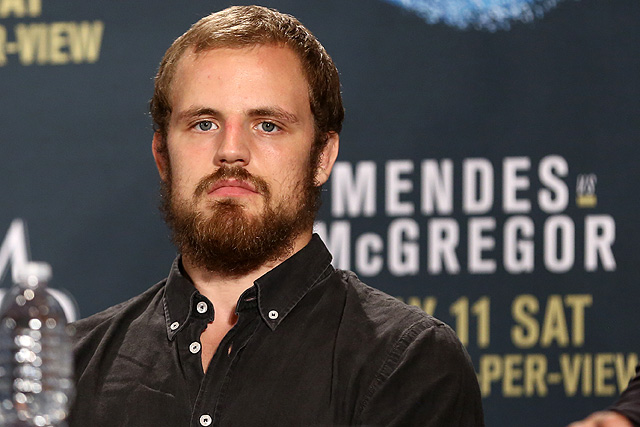 Gunnar Nelson struggled to get a fight for UFC London

Gunnar Nelson, who defeated Alan Jouban at the recent UFC London event, revealed that he struggled to get anyone to take a fight with him.

“This is what happened really. Obviously, I was announced late on the London card because it took a long time for me to get an opponent,” Nelson told FOX Sports. “Also, the card was supposed to be full, we were trying to get on it and they said it was full. Then they came back and said ‘you want to be co-main?’ and we were like hell yeah. So they went through all these guys and I guess no one was willing to fight. I don’t know what was going on. Some said they were injured. Some were out indefinitely.

“It was about five guys I believe they said that wouldn’t take the fight. All top 10 guys. Then they said this guy Alan Jouban, he wants the fight and I’m like let’s go. Props for him stepping up.”

Jouban certainly stepped up however was soon to realise why so many opponents decided to give the fight a miss, after being knocked down then submitted by a choke.

“I guess I don’t know if it’s the fighters themselves or the managers, but I believe ultimately the fighter will decide. It is frustrating,” Nelson said. “I had a good victory in my last one and I was hoping to get a top 10 [opponent] this time, but I guess it’s not bad. I got a fight. I basically wanted to step in there and fight and Alan stepped up. In this case, I’m fighting somebody and I have everything to lose and he had everything to win. I was supposed to win this fight on paper.

“I guess I’m showing that I’ll do that. I expect those guys to do the same. That’s how it is. You can’t always fight guys who are higher ranked.”

Nelson’s coach John Kavanagh was vocal in his wish for Nelson’s next opponent, naming Stephen ‘Wonderboy’ Thompson as who he would like to see the Icelandic star take on next.

Nelson would like either Thompson or Robbie Lawler next. However will take on any of the top guys.

“I would love to fight “Wonderboy.” That’s a fight people seem to want to see,” Nelson said. “That’s the fight that’s most hyped up right now. A fight with him, a good win over “Wonderboy” would be huge for my career. I would love that but as I said, I would fight any of them.

“Robbie Lawler is a big one as well. Any of them guys. To be honest, I understand that I could fight Robbie or “Wonderboy” and it would skip some steps to get that money and the gold and I like that idea. But ultimately, I believe I will fight all those guys. In what order is not the most important thing to me.”