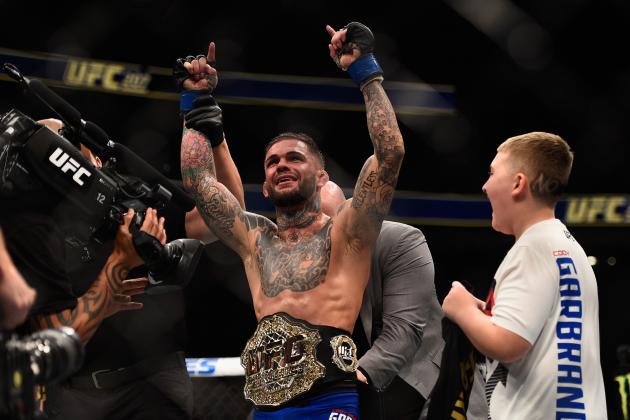 In 2016, Cody ‘No Love’ Garbrandt went from un-ranked prospect to the new UFC world bantamweight champion and the first man to beat Dominick Cruz in just under 10 years. Not only did Garbrandt beat the long-reigning bantamweight king in a unanimous decision, he did what no other fighter in the UFC to date has been able to do –  completely overwhelm and outclass ‘The Dominator’. He did this through beautiful head movement, lightning quick feet and even faster hands and it was something not a lot of experts had predicted in the lead up to the bout.

Many believed Cody’s only chance at winning was a quick KO as they didn’t feel he could outlast Cruz in a gruelling five-round war – he proved all doubters wrong however as he walked out of the Octagon that night the second youngest UFC champion of all time. Today, we’re going to look at what has made him so successful in his short, impressive career to date and also, providing he gets through his upcoming bout with teammate-turned-enemy TJ Dillashaw at The Ultimate Fighter Finale what the future has in store for the young UFC champ.

‘No Love’ grew up in the small town of Urichsville, Ohio, USA. He began Boxing aged 15, trained by his uncle Robert who was an alternate for the US Olympic team. He also began competing in wrestling around that time and saw himself excel at each sport, winning the Ohio State Wrestling Championship in 2007. Cody was also an Senior National All-American the year before, but ultimately chose to pursue his love for Boxing where he went 31-1 as an amateur. At the same time, Garbrandt was competing in amateur MMA fights, the first being in 2009. After realising his talent and potential in Mixed Martial Arts, he turned pro in 2012. 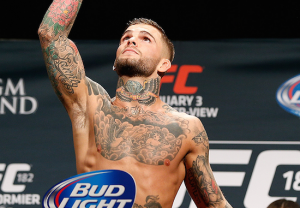 With an impressive 9 KO or TKO finishes in his 11 professional fights so far, it’s easy to recognise Garbrandt’s imposing power but it’s the fashion in which he executes them in that is so awe-inspiring. The perfectly-placed right hand that led to the clean KO of Brazilian prospect Thomas Almeida can only be described as devastating and the manner in which he ran through former contender Takeya Mizugaki was so exciting it earned him a shot at Dominick Cruz ahead of the most obvious No.1 contender in TJ Dillashaw. The fact that Cody produces so much power from a relatively small 135lb frame bodes well should he move up a division in the hunt for that coveted second UFC championship belt. 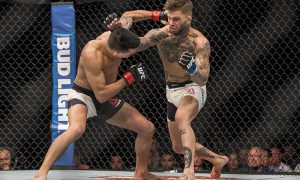 One thing most experts were not predicting in the lead up to his UFC 207 bout with Cruz was Cody’s ability to completely shut down the champs offense with his lightning quick foot movement and super slick boxing and they certainly weren’t predicting him being able to keep it up for a whole 25 minutes. The reason no one expected him to perform the way he performed though was no fault of their own, it was solely down to the fact none of his opponents were able to last in the Octagon with him long enough to put his skills on show. The speed and agility he displayed wowed the millions watching and made people take notice of how big a talent ‘No Love’  really is and that night in the T-Mobile Arena turned out to be a coming-of-age party for the UFC’s newest potential star. 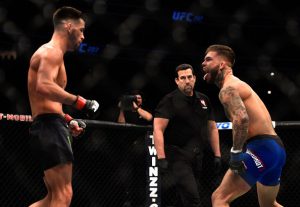 Garbrandt always knew he was destined for greatness. He had grown up with Dominick Cruz as the dominant bantamweight king who’s only loss had come to future mentor Urijah Faber back in the WEC days. From the first time he watched an MMA fight, he know he would conquer the young sport. He gets his nickname ‘No Love’ from his stone-cold natured approach to his beloved sport.” I don’t glove touch. I don’t shake hands. I’m in there to fight. We can be cool after the fight, but it’s all business from the weigh-in till my hand is raised at the end of the fight.” Garbrandt said in the lead up to his UFC Debut vs Marcus Brimage. If mental toughness is the key to great champions – Cody Garbrandt’s future is surely as bright as we have seen in a long time in the sport. 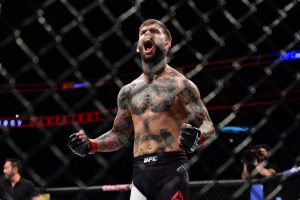 His next bout, as mentioned earlier, will be the first defence of his newly-owned UFC belt and Cody will be looking to win in style. Though it may prove difficult as his opponent will be former UFC champion TJ Dillashaw. The pair trained together during the early stages of Garbrandt’s career however Dillashaw chose to move  from Team Alpha Male in Sacramento, California to the much colder region of Denver, Colorado to join the newly formed Elevation Fight Team. Providing he makes it through that bout still in possession of his title, prospective mouth-watering opponents such as pound-for-pound king Demetrious Johnson and featherweight champ Jose Aldo lie in waiting. Should he go 3-0 in these fantasy match-ups, you will be surely looking at the next UFC megastar.