by Myles Painter
in Across The Pond, UFC
42 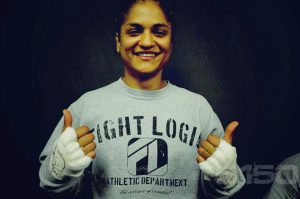 their mark. In today’s episode of Across The Pond, you will meet one of those talented Straweights looking to continue her ascent in the division. A professional since August 2016 and representing Team Alpha Male in Sacramento, California 29 year old Cynthia Calvillo owns a 4-0 record consisting of two knockouts, one submission and one decision.

In her MMA debut, Cynthia defeated Jessica Sanchez-Birch via TKO in the second round. Then she defeated Gillian Robertson via unanimous decision. At Legacy Fighting Alliance 1, Cynthia defeated Montana Stewart via TKO in round three. In her UFC debut at UFC 209 she faced Amanda Bobby Cooper and submitted her via rear naked choke in the first round. Calvillo will be aiming for her second straight octagon victory when she battles the debuting Pearl Gonzalez 6-1 this weekend at UFC 210. Good luck Cynthia!

Who is the most popular fighter from the UFC?